The Tradition of Floor Paintings on Deepawali in India 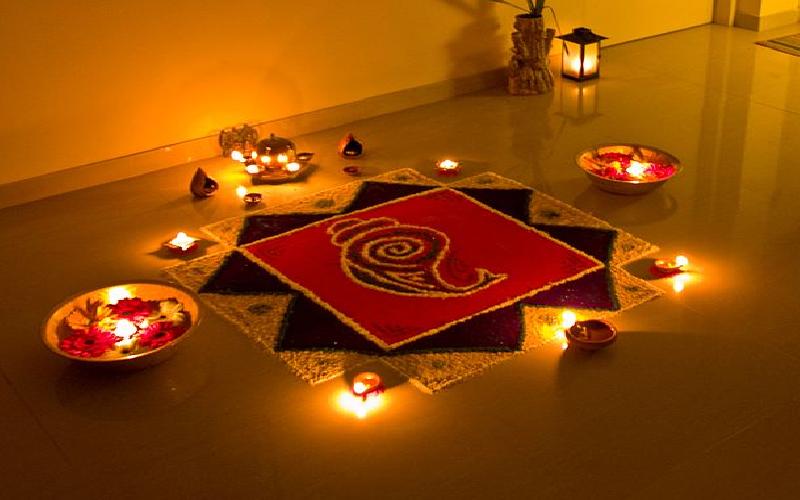 Among the various forms of folk art have thrived in India since ancient times, the art of making ‘Rangoli’ of floor paintings made with materials commonly available in Indian households has a special place of pride. These paintings vary from the simplest of forms that can be made in a few minutes to most exquisite ones that are a reflection of unique skills.

Rangoli or the Indian floor paintings have been a part of the age old Indian tradition, followed for a few thousand years at least. It is a simple, inexpensive and yet very elegant forms of art that thrives within the household and attracts and delight the people, just like all works of beauty are supposed to do.

'Rangoli' can be best described as a traditional Indian form of floor painting made in and around homes, places of worship and public celebrations as a means of decorating these places on special occasions. It represents an age old tradition, carried on by the households, where rangoli is prepared on most festivals, usually by the ladies and the girls, though there is nothing to stop a male member who wishes to contribute. Diwali is also one such occasion, when rangoli can be seen in many homes as part of home decoration and festivities.

Rangoli is usually made of powdered substances like rice or wheat flour easily available in households, which is then colored using natural dyes like indigo, turmeric and other vegetarian products. People who take it more seriously, often use sawdust, whose coarse texture increases the scope for creativity and allows a three dimensional appearance.

The usual designs and shapes are taken from ordinary geometric figures like triangles, circles, stars and the like or nature like birds, flowers, animals etc. The more colorful design requires more effort, and large colorful rangolis often taken a few hours to make.

Rangoli is called by different names in different regions in India. It is called 'Alpana' or 'Aripana' in Eastern region of Bengal and Bihar. In the Western part is often referred to as Rangoli, while in South India, it is also known as 'Kolam' or 'Muggu'. The designs and colors as well as materials used also differ from place to place. In some homes, especially in North India, rangoli is prepared in a very simple way by using turmeric paste alone (as yellow paint) or mixed with lime (as red colored paint) to draw the ancient religious symbols like 'Om' (a symbol for god) and swastika (another ancient Indian symbol also associated with other ancient civilizations, also used by Nazi who associated it with Aryan race).

The Genesis of this Rangoli Tradition in India

While for most people, it is a traditional ritual, there are many for whom it is another occasion for expressing their creativity. People use innovations like forming a rangoli of colored sawdust that floats on water and gives a three dimensional effect, often used along with floating candles. Others concentrate on modern designs and figures, many a times abstracts of Lord Ganesh and Lakshmi, who are traditionally worshipped on Diwali.

Rangoli making on Diwali has been going on in India for many thousand years. It is folk art preserved in tradition and its practice has not been adversely affected by the modern strides of science and cultural amalgamation that has destroyed many other forms of traditional and folk artistry. At least, not yet!