The Festival of Maha Shivratri 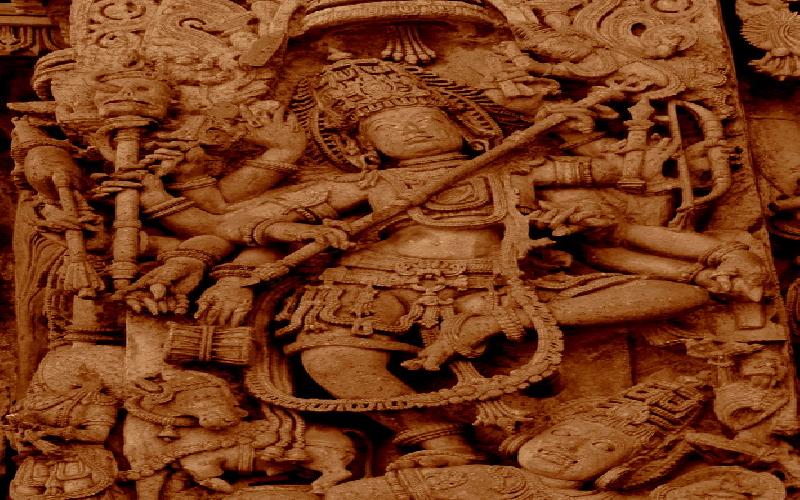 Shiva means benevolent, and represents the form of God that brings about creative destruction of old so as to make way for the new. Maha Shivratri has its origin in the mythological story of Shiva indulging in Tandava after her wife, Sati gave up her life on being insulted by her father looked down on Shiva. It is a day of worship and festivities and is widely celebrated among Indians.

Maha Shivratri is an important festival in India, which Shiva devotees celebrate with a lot of fanfare. Like most other religious festivals of India, it also has a great social component that adds to the religious sentiment, and often even overtakes it. Shiva, one of the three major forms of Lord, is worshipped by a large number of Indians.

Maha Shivratri: The Night of Shiva

MAHA SHIVRATRI is the night of the SHIVA, the destroyer, and is celebrated on 14th night of waning moon in the month of Maagha or Phalguna in the Indian lunar Calendars. In 2012 it falls on 20th February. It is a religious festival that different people celebrate in different ways.

For ardent devotees it is an auspicious day for surrendering them to god and they express their devotion by fasting, praying, meditation and various rituals of worship. For housewives, it time to seek blessings of the Lord for their family and children.

For most people, especially children, it is time to celebrate, enjoy and eat 'Prasad' - delicious sweets first offered to god and then distributed to all in the family as well as to anybody joining the celebrations.

Origin and Essence of Maha Shivratri

In Indian philosophy, the almighty god is observed in three roles, each of which is assigned a different identity. The creator of the universe is BRAHMA, the preserver is VISHNU and the destroyer is RUDRA or SHIVA. Interestingly, destruction is seen not as an evil, but a necessary and inevitable part of the cycle of existence (kalachakra), wherein new life cannot come up unless old and decaying gives way. Shiva also means 'benevolent', so Shiva can be considered as the benevolent form of almighty that undertakes the unglamorous responsibility of destroying the old to make way for new life.

Maha Shivratri is the anniversary of the day on which Shiva indulged in TANDAVA, symbolically considered a dance of nature that destroyed much of the universe. It is also associated with a lot of other myths and legends that have become part of popular fables over the millennia. A collection of such fables and stories, titled SHIV PURANA has existed for a few thousand years.

Like most Indian religious festivals, Maha Shivratri also is an occasion for people to remember the humbleness of their existence and merge their egos in to the larger expanse of this vast cosmos. It is another day that reminds people of their obscurity before the almighty powers of nature. In the tradition of Indian philosophy that emphasizes three ways of attaining self actualization - GYAN or knowledge, KARMA or action and BHAKTI or devotion, it is the day when devotees submerge their existence and identities in that of the almighty Lord of universe, that is all pervading and the beginning to end of all that exists.

These are a large number of mythological stories associated with this festival. The primary of them is the story of SHIVA and SATI, the wife of Shiva. Shiva is said to live on the mountains in Himalaya as a saint, with nothing glamorous being there in his life style or possessions. Sati, his wife and daughter of a King named Daksha was not invited by her father who was having large religious ceremonies at his palace. Somehow, she came to know of them and decided to visit her parents, even though she was warned by Shiva that she has not been invited. When she reached there, Daksha insulted SHIVA in front of the large gathering, and unable to bear the insult, Sati jumped into the holy pyre that was lit for the ceremony, and gave her life. On knowing this, Shiva, in anger, performed TANDAVA dance - the dance of destruction that destroyed Daksha's kingdom and most of the universe as well.

Another mythological legend pertains to SAMUDRA MANTHAN - the churning of universe that existed as an ocean by the two leading and competing powers, the DEVAS and the ASURAS. This churning was done to find all that was useful, but most of all, for AMRIT, a substance that gave immortality. However, once the churning began, the first substance that was precipitated was VISH - the poison that threatened to destroy all and no one was able to neutralise it. Then on request of all, Shiva engulfed the whole substance, and stored it in his neck. As he did so, the colour of his neck became blue because of the poison, a reason why he is also referred as NEELKANTH or 'blue neck.'

On the day of Maha Shivratri, devotees keep a fast, some not even touching water. They visit temples and offer prayers. Various religious rituals that differ from place to place and temple to temple are also performed, most consisting in the form of washing and decorating of Shiva idols and performing AARTIS - prayers of the Lord after lighting a lamp and donating money to the temples from which temples prepare sweets that are first offered to the Lord and then distributed to all devotees visiting the temple.

Like most other Indian festival, for most people, it is another day to offer prayers, meet family and friends, eat delicious delicacies and enjoy the changes that are brought for a day from the daily monotony of life. 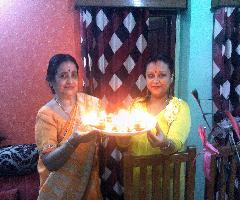 Deepawali is a long festival of lights. It begins with Dhanteras, then on the 14th day there is 14 diyas, 14 spinach, followed by Laxmipuja and Kalipuja.